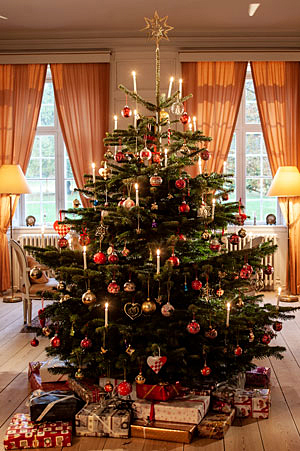 Nordmann fir – or Silver fir as it is often called – was named after the Finnish botanist Alexander von Nordmann who discovered this unknown tree species in the Caucasus Mountains. Today, it is the most frequently used Christmas tree in Europe, and considered by many to be the most beautiful.

The most beautiful Nordmann fir Christmas trees come from Denmark. This is due to the mild, coastal climate and the cool, bright summers. It is also in Denmark that growing this sort of Christmas tree began 50 years ago. Since then, the tree has become a cherished favourite in many homes worldwide.

The Nordmann fir is characterised by its beautiful dark green colour and long soft needles. It is very regular with voluminous foliage and a beautiful shape. A Nordmann fir stays fresh for a long time and is known for its good needle retention.

We offer Nordmann fir Christmas trees in heights ranging from 75 cm to 12 metres. Click on the menu to the left for a description of the various qualities we offer.